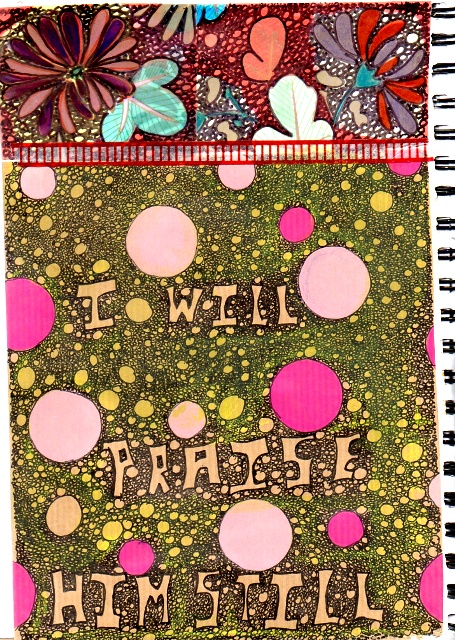 Page done the day after my surgery

So not long after I wrote my last post on going to the hospital I received a phone call from my surgeons receptionist asking if I could go in the next morning for my operation as they had had a cancelation. I am sure you can imagine my reaction. But I still said yes, I knew this was in Gods hands and He was leading this as He had done from the beginning.

It is now a week later and I can say it’s been a life changing week. The surgery was to remove a lump from my temple. I have had a small lump above my eyebrow since childhood but over the past few years it, or I believe it was that I dont know yet, started to grow and change shape. I ignored it at first plus I was so ill I hardly noticed it, I never looked in a mirror I didn’t see the point. Other people noticed it though and family was starting to ask and worry about it. 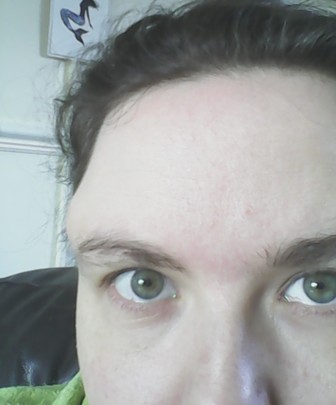 However not long after I gave my life to Jesus in May 2013, I went back to the Drs (which was a shock to everyone as I had decided I would never go back again after the treatment I had had). While there my husband mentioned the lump as I had no intention of doing so and the Dr sent me to hospital. I was sent for an MRI last June but I couldnt do it as I can’t tolarate lieing flat so I thought I was discharged. Months later a letter came though the door asking me to go back. I realised then that The Lord wanted me to get this sorted so I went for an ultrasound and a CT both very hard but the Lord strengthened me each time I went.

They still didn’t know what it was so said the best course of action was surgery to get a proper diagnoses. Hence the phonecall last week.

As I look back I can see the Lords hand in all of this. The CT was a big challenge for me and I felt his presence during that so strongly. Every thing I have had to do He has calmed me and considering I suffer from anxiety I know it’s nothing to do with me. Before my operation I felt so peaceful, I had nerves of course I did but I just knew I was doing something I was supposed to be doing and that He was there and I was safe. I accepted my nerves and saw them for what they were and that feelings can not take me out of my Fathers hands.

The few days after were hard, I didnt take very well to all the meds or anasthetic they gave me and was very sick and couldn’t eat properly for a few days, but once again even though my body was shaking and I was being ill I felt peaceful deep inside. Its hard to explain. I think its something that can only be felt to be understood to be honest. This doesnt mean that I didnt cry and get upset because I did, it was a shock to my system and I was in pain (but not as much as I expected to be honest, Praise the Lord). The Lord continually reminded me of His presence and reassured me of His love, He knows my weakness and He understands. He does for all of us. 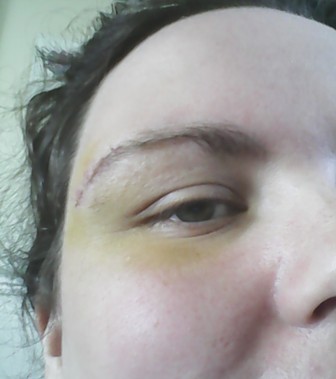 – This was taken yesterday after my stitches came out, looking at these pics I can’t believe I didn’t realise how much of a difference it made to me, I wasnt bothered by how I look and I’m still not. This wasn’t done for cosmetic reasons at all but I am surprised by how different I feel in myself now its gone.

I have received so much support and kindness from so many people its been overwhelming, I’ve had messages of’ support and so many people praying for me. I have a lovely friend who has been there for me who has provided emotional and spiritual support, I strongly believe the Lord has bought us both together. And then there’s my husband I can’t even begin with that one, he sat in the hospital for nearly 6 hours just so I didnt have to wait after being discharged, I don’t deserve him. He has looked after me since I became ill and I love him very very much. He encouraged me to keep eating, he worries so much when I can’t. I know he won’t read this I just pray that he knows how much I appreciate him and that I show and tell him enough.

I won’t know any more until the test results are back so I have no idea if this is the end or if there is any more to come. I do have a few things that will take time to get used to, my face looks quite different which I wasnt expecting and I dont know if I will gain movement back in my eyebrow (the surgeon did warn me of this) however I do know The Lord will be there no matter what happens as He doesn’t change. Ever.

I know that as health issues go this isn’t the worst thing that can happen but the Lord is there for us in all our trials, He knows our hearts and strengthens us especially those like me who are a little weaker than others. I don’t mind because I know in my weakness I allow Him to reveal His glory so I am happy to be weak.

Beloved, think it not strange concerning the fiery trial which is to try you, as though some strange thing happened unto you

But rejoice, inasmuch as ye are partakers of Christ’s sufferings; that, when his glory shall be revealed, ye may be glad also with exceeding joy.

(I think this part of scripture is about persecution, but the Lord used it to help me through and I am very grateful to Him for it)

A follower of Jesus who loves to create. I share about my faith, my creativity and lessons God teaches me though motherhood and beyond. View all posts by Hannah

Trusting in Jesus when life changes is hard and it is so tempting to question why. But He knows the end from the beginning and nothing is a surprise to Him. That doesn’t mean that some days I can’t just cuddle my sleeping boys and softly weep to Him and ask for His comfort and reassurance. Which He readily gives. #depressionhelp #mentalhealthawareness #mentalhealthmatters #mentalhealthrecovery #jesuscares
New year new #sketchbookchallenge this is a contour drawing of little S new camera, he has been living photographing our Christmas and new year
The Christmas toy building is not over...
Today has been manic and, even though I’ve had a lovely day and I am very grateful it still saddens me as it’s meant ive barely thought about The Lord let alone worshipped Him for sending His Son to save me. Which is so not the point of this day. It has made me think though about those who do not like Christmas or have grief or pain this time of year. I have been reminded that no where in scripture are we commanded to celebrate Christmas, let alone buy gifts, decorate our houses, eat until we are going to burst etc. Yet we feel if we do not do these things then we have missed out in some way or that we let others down. I just want to encourage anyone who knows The Lord and finds this day hard. I know how horrible it feels, but, Its ok, Jesus does not mind if you do nothing, in fact if you walk with Him everyday, thank Him for His sacrifice and coming here as a babe then you are celebrating Christmas everyday! And if all you have done today is thank Him then you have celebrated more than anyone who’s house is glowing and are full of gifts, food and even family. This photo is the only photo I got today as I was so busy, I know I for one am looking forward to everything going back to normal and finding my precious moments of time with Jesus again ❤️ #christmas #mentalhealthawareness
It’s beginning to look a lot like #Christmas #kidscrafts #familytimes
I’ve been going to a mixed media class recently and I am enjoying experimenting and playing without worrying about if it would sell. It’s very freeing 😊 #mixedmedia #fabriccollage #fabriccollageart #christiancreative #glorytoGod